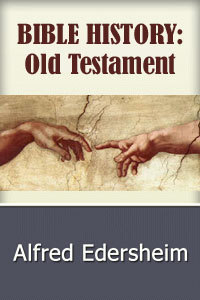 Since its original seven volume appearance in 1890, Bible History: Old Testament has encountered many rivals but no successors, and its relevance for the Christian faith has only been reinforced during the intervening decades. In this enduring classic, Alfred Edersheim explores the broad sweep of Old Testament history. He brings to his work his immense learning and familiarity with Judaism, as well as his love for Scripture and his desire for every Christian to know and understand the story of God's redemptive work in history.

About the Author
Alfred Edersheim (1825-1889) was born in Vienna, Austria to Jewish parents, and was brought up in the Talmudic traditions and customs of the Jewish faith. He was converted to Christianity in Budapest through the ministry of a Scottish missionary, John Duncan. When Duncan was appointed professor of Hebrew in New College, Edinburgh, Scotland, in 1843, Edersheim accompanied him and enrolled as a student.

After studying at the University of Berlin, Edersheim became a minister—first Presbyterian, later Church of England. He served from 1846 to 1849 as a missionary to Jews in Romania. From 1849 to 1882 he was pastor of several churches in Great Britain.

Edersheim's unique position as a scholar trained in both the Jewish and the Christian traditions including all the Biblical languages and his extensive knowledge and understanding of the culture and religious beliefs in early first century Roman-ruled Judea made him quite an authority on all things Biblical.

Some of Alfred Edersheim's most widely read works are: The Life and Times of Jesus the Messiah, Sketches of Jewish Social Life and The Temple: Its Ministry and Services.

This is one of the most popular of Edersheim's writings and probably the most valuable in terms of its usefulness to preachers, Sunday School teachers and general readers.