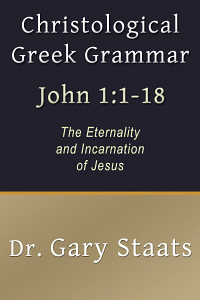 The Christological Greek Grammar: John 1:1-18 teaches Greek grammar in an easy-to-follow style. First, the Greek text of each verse is stated in full. Next, the vocabulary is given. Thirdly, a discussion of each word from a full grammatical perspective is presented. Finally, a Christological emphasis of the text concerning the eternality, deity, work, and incarnation of Jesus Christ is discussed.

Dr. Gary Staats is the Gale and Harriette Ritz professor of Old Testament at Winebrenner Theological Seminary in Findlay, Ohio. He received his Bachelor of Arts degreee in Bible at Southeastern Bible College in Birmingham, Alabama in 1963; his ThM in New Testament Greek from Dallas Theological Seminary in 1967; his ThD in Biblical Studies from DTS in 1971; and his Master of Arts in Hebrew and Ancient Near Eastern languages at Dropsie College of Hebrew and Cognate Learning in Philadelphia, Pennsylvania in 1983. He completed his PhD in Hebrew and Near Eastern Languages at New York University in 1989. Dr. Staats has been a professor and pastor for many years, serving at various schools and in numerous pastorates.